UPDATE before the Bank Holiday (!)

ANTICLINE: GPS-triggered soundscape for Westdown Quarry (now running). This work can be downloaded free from my website (all instructions for downloading and use are HERE!)

PERICLINE: sonic audio-art gallery piece for the Black Swan, Frome: this is the third piece in the triptych of audioworks for Step in Stone; it’s now in its final stages:

Very many thanks to great guy Charles Clapham, Workshop Supervisor for the School of Earth Sciences, Bristol University. I rang him up out of the blue with my strange artistic request to create rock core samples out of the Fairy Cave Quarry rock so I could animate them and he said, “bring’em in!” “When?”, I asked. “Now,” he said. Two weeks later he rang me up – he’d made two 25mm cores out of the rock. Thanks to Bristol Uni!

“The morning’s baldness dissected the straight line of horizon. He raised his head and saw the arc of the bitter flight as petrels sheered out of the Atlantic on the tilt of the crystalline plane; and the waters streamed off it down to an infinity where Choughs ran red-legged and inchoate in their golden, golden cage. He swerved his gaze: landwards! And the sea hauled him back: come rest in my bosom, come suck and gnaw with me at the stubborn land. Then all will be sea and all will be sea and all will be at sea; and all will have returned, free as dolphins who, so many aeons ago, faced the same choice and chose. Can we say we chose right?”

Sometimes I think ‘hey, you’re supposed to be a poet – so what’s with all this digi-stuff???’

The actual process is fascinating and can get obsessive: instead of composing onto a scoresheet, or even by feel, you’re composing into a real landscape: you’re overlaying a virtual soundworld onto a real place which can only be heard in that place – nowhere else on earth. You have to decide whether there are scattered soundpools which have to be ‘hunted’, or whether it’s a continuous experience (in this case it’s continuous); you have (as above) to consider how long an average person will take to walk through the soundpool; that they may not walk thru’ it at all, but simply stop and listen until it finishes (how does this affect the experience?); whether to loop the tracks – which leads to one kind of experience; or simply play them once only; are they to be programmed enter/play/keep playing on departure, or enter/play/fade out (or stop) on departure/start again at same place  on re-entry/start at beginning again on re-entry? What sounds do you want to place on which topographical features? What sounds are there there already? Do soundpools overlap, and if so, what does it sound like?

RALPH HOYTE: Battened down the hatches and got seriously down to the actual act of creation this week (impending deadlines always help inspiration, of course). I’m creating SYNCLINE in Fairy Cave Quarry with my frequent collaborator Phill Phelps (audio engineer, coder, musician). It all started with me saying to Phill, ‘hey, how about hanging autonomous speaker units off the rim of the cliffs and beaming sound into the quarry?’ (see earlier entries).

So far we’ve bought most of the gubbins: 6 megaphones (more waterproof than conventional speakers, being made of metal), the mp3 player circuit boards, the wiring etc. We’re waiting on the bike batteries to drive the things – held up in China, I believe.

So much for the hardware. The software, in this case, is the poemscripts I’m writing. ‘Poemscripts’? The technology, that is to say the form, decides the content. Let’s say I wrote a conventional poem and simply divided it into 6 parts, or voices. You’d have 6 voices possibly overlapping each other. This would be mere cacophony. So the point is, how to compose for 6 ‘voices’ in this setting. I decided to set up 6 buckets, theme them, then simply dump all material pertaining to that theme into that bucket. Current buckets are:

No human voices were abused in the making of this work. They are all synthesised. Each ‘theme’ has a synthesized voice. The synthesised voices were virtually auditioned (which led to some rather amusing conversations, e.g.: Ralph: where’s Ana? Phill: she’s downloading. Ralph: tell her to get a move on, we haven’t got all night! Phill: OK, she’s downloaded – but whatiszname … Ralph: Oliver, English Oliver – Phill: he needs upgrading, that’s the old voice, let me get his updated voice…)

So far we’ve got:

Each quarry/medium of delivery demands a different mix. SYNCLINE in Fairy Cave is fractured, often broken, gnostic, hermeneutic. Not only do we have a quarry, where things which were not meant (!) to be seen lie exposed to the sun, the air, the gaze; also things here were smashed up, pulverized, blown apart, make up our roads, we drive Mercedes GLA45 AMG 4MATIC’s on them; but also: SYNCLINE – the earth in her groanings moved, she fractured the rocks, they were made molten, or lay flat and serene whilst the millennia snowed calcium on them. So the words are fractured, groaning, the millennia have sowed inconformity in them, things have intruded on their reverie, the notes are incongruous, scatty, effluvial…

Delivery is ‘in progress’. The mp3 readers are just … mp3 readers, They don’t do fancy stuff, they just read file1, read file2, read file3. So we sow ‘blank’ (silent) files in amongst them. The amount of silence depends on the nature of the voice. So Veena, for example, takes 8 hours to finish her list, and only then loops. Susan is more vocal. But we have to sow enough silence in amongst the files so that the chances of cacophony are small (but cacophony is sometimes good). Then we simulated on Ableton Live. Then we turned some down so you get the effect of the megaphone nearest you is loudest (of course), and the others are at various distances (which they will be, depending on where they are aimed). Then we considered the level of each, so we’d know how close you have to get to a megaphone to hear it. Then we put an echo on some. Then we decided we were tired and there were too many variables to code, so we went and cooked supper and drank cider.

ANTICLINE in Westdown is for a different media: GPS triggered smartphone media. So people will walk through the quarryscape. Will you expect ‘a story’. Maybe you’ll get one, maybe Discobolous will eject his head from the bedrock and stagger forth. I don’t know, I’m currently writing it, I don’t know what he’ll want to do, say. Maybe nothing.  Voices? They haven’t spoken, yet.

Went looking for Richard Long on the Downs in Bristol as part of the upcoming Arnolfini exhibition. Just thought as its stone and stuff could be posted here as being of interest (Ralph Hoyte) 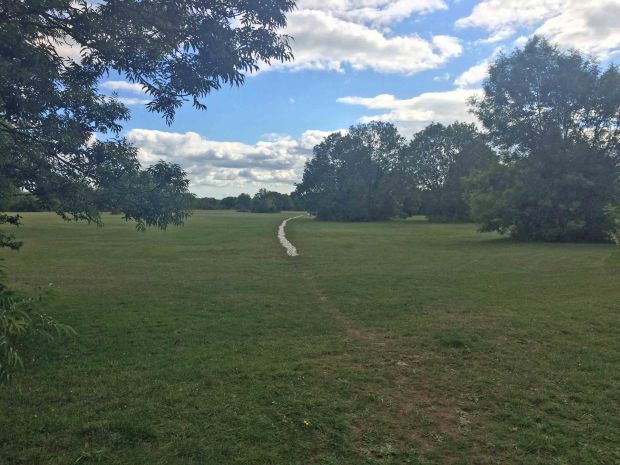 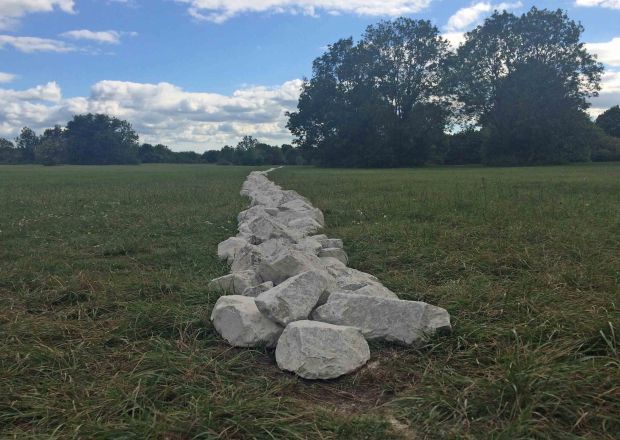 [Ralph Hoyte} Forgot to take map of figure-of-eight walk when last visited Westdown Quarry. Blue GPS track is my route, picture below is the actual figure-of-eight. I’ll probably use Appfurnace software to configure the GPS-triggered walkscape. Users will need to download Appfurnace onto their smartphone. You then scan a QR code in (which will be made available to you somehow, possibly people will have to register with me, then I can send it to them). When you encounter a virtual pool of content, you will be able to listen to it on your iPhone or Google Android smartphone. No, no network signal is required, just a GPS fix, which your phone will do automatically.

Talker to my brother in law – a geologist – yesterday whilst out on a bike ride (interrupted to drop in to their flat)(thanks for the sherry and crisps! That’s what I call ‘a bike ride’!). He said ‘PERICLINE’ was a word. Indeed it is:

The Mendips are an example of anticlinal folds, recognised on geological maps by a concentric outcrop pattern with the oldest rocks at the core. The distinctively shaped variety of anticline that forms each of the Mendip Hills is known as a pericline.

So that’s it: Syncline / Anticline / Pericline

[Ralph Hoyte posts] I am a Bristol-based poet, writer and producer of GPS-triggered locative media. I deal in the live voice – mine, or multi-voice set-ups, set, er, somewhere, somehow. I write, sometimes, ‘poetry’ (whatever that is), more often, ‘poem-scripts’, often heavily research/historically/cultural-historically-based. I deliver them  live, or through ‘locative media for the smartphone’, or through any other means to hand (such as Raspberry Pi powered sculptures responding to user input through touch or light). I often work closely with Phill Phelps, coder and audio-engineer, on the  technical aspects of such projects.

For step in stone I am working on a triptych of sound interventions which all feed off the same poemscript; SYNCLINE , ANTICLINE, AND PROCLINE.

come in numero 82 your time is up: the different bits of the autonomous megaphone assemblage

The poemscript is recorded (2 or 3 voices, probably my voice and 1 or 2 synthesized voices), placed on an SD card inserted into a mini-mp3 player circuit board, played back through a megaphone (it’s waterproof), whole thing driven by, essentially, a motorbike battery. There are 5 or 6 such autonomous assemblages. They are hung off the edges of the cliffs in ‘The Amphitheatre’. Each unit has a different ‘personality’. The SD card is loaded with poemtext, possibly ambient, and … silence. At any one time you get poemtext, ambient, or silence. Six of these doing that, each with its different personality, creates the soundwalk as you perambulate around the floor of the Amphitheatre (keeping well away from the walls!). I like serendipity. There will also be a nightwalk.

‘The Amphitheatre’ at Fairy Cave Quarry 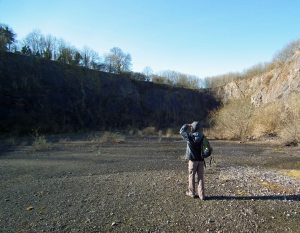 A GPS-triggered soundwalk for the smartphone:  ‘pools of sound’ are virtually placed along the ‘figure-of-eight’ walk around Westdown Quarry (think that man on the TV add who stumbled across a red circle on the ground: when he stepped into it, he heard music, when he stepped out of it, it stopped. Remove the red circle. That’s it)   You download the app, go to Westdown and turn it on. When your phone encounters a pool of sound you’ll hear the audio for that ‘virtual red circle’ (and, no, it doesn’t need a network signal). Of course, it’s  more elaborate than that ‘red circle’ scenario: you can make the audio in the soundpools do different things; you can also, interestingly, ‘stack-up’ the soundpools, or overlap them. Who knows what happens when you overlayer 3 zones?

‘A haptic audio-device’ for the Canal & Rivers Trust

For starters, the word ‘procline’ doesn’t really exist (see, WordPress underlined it in red. It doesn’t exist), and, if it did, it’s not, unlike ‘syncline’ and ‘anticline’, a geological word. Never mind. Maybe I’ll rename them ‘syncline’, ‘synform’ and ‘syntax’. Whatever it’s called, PROCLINE is  going to be a gallery-piece consisting of (probably) a geological specimen drawer thing with 3 drawers. When you pull out Drawer 1,  audio channel 1 is activated; ditto 2, ditto 3. What you hear of the common poemscript depends on how many drawers you’ve pulled out/pushed back in, and in what order. To add another layer of serendipity,we may programme it so  the audio-files associated with each drawer are chosen by the mini-computer driving the whole thing. In the drawers may be … stuff, resonating with the quarries. So it’s visual and tactile and user-directed.