bears us up; stone

marks the place where

squabbled upon the earth…”

If you were to fly over the Mendip Hills in Somerset, UK, the most striking feature would be the number of vast quarries dominating the area – among the largest in Europe. Less obvious are several disused quarries, rapidly being re-colonised by nature. You can easily walk within a stone’s throw of many of these quarries without noticing they are there, so still and empty they stand but stumble across one by chance and you can’t fail to be amazed by their grandeur and beauty.

Artist Fiona Campbell discovered old quarries while walking her boxer dog and exploring the area a few years ago. Inspired and fascinated by their unexpected drama, Fiona embarked on an investigation into these hidden gems, while also finding a new source of discarded scrap metal for her sculptural work.

“The first disused quarry I came across was on a woodland walk. From a narrow dark pathway, an opening leads you to a rocky escarpment, down a scree slope into a huge canyon-like landscape, filled with lush lakes, massive stratified cliff faces and birds of prey hovering above – it was truly awesome and remains my favourite. So many quarries in the Mendips are now disused, enigmatic environments, taken over by wildlife, some designated as ‘Sites of Special Scientific Interest’. Others are desolate underworlds of canyons, lakes, huge ruins, and rusting machinery – fossils of both ancient and modern eras. Scoop out a hundred tons of rock a day – carboniferous limestone for example – for 120 years and you have a gargantuan cavity of time, reflecting life dating back over 350 million years. All this provides an extraordinary backdrop and inspiration for artwork”, Fiona explains.

3 years on, Fiona formulated an ambitious plan to stage an art-in-quarries trail, bringing together groups of like-minded, passionate artists, scientists and educators for a major art project entitled step in stone. Having received their full funding target for the project, thanks to Arts Council England/National Lottery, Mendip Hills/Mendip AONB, Ganes Trust, Somerset Art Works, Somerset Wildlife Trust, a local trust fund and numerous individual supporters via IdeasTap crowdfunding, (also a donor), step in stone built up to an extraordinary Finale, delighting thousands of visitors since its opening in July.

The 3 quarries have very different characteristics – Westdown/Asham is disused, massive and dramatic, with a long pathway, stream and neighbouring Asham Woods SSSI. It has been used as a backdrop for filming Dr Who. Halecombe is a working quarry with a peripheral circular public pathway overlooking the site, while Fairy Cave Quarry is mysterious with stunning limestone rock formations and renowned caves. 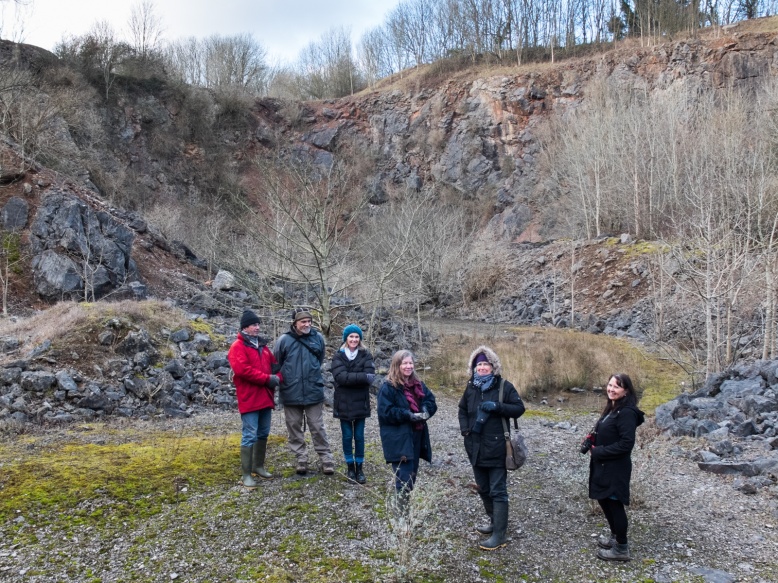 “ I am very excited to have on board such high calibre artists.  It will certainly be a challenging project!” Fiona said. 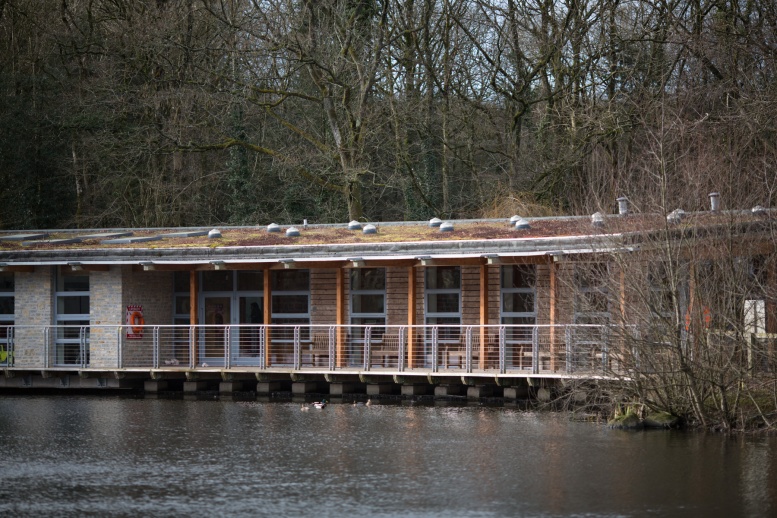 Young budding artists had an opportunity to get involved and exhibit their own work alongside international artists. A sculpture design competition was held in May ’15 in collaboration with BSA, for under 20 year olds. Up to 20 of the best entries will be on show during Somerset Art Weeks Festival ’15 at the Black Swan Gallery. The winning designer work with step in stone artists to create her sculpture, which is now being exhibited as part of the Trail at SESC. (More about the competition)

The Mendips are characterised by a wide variety of sedimentary rock types formed in a range of different ancient environments from tropical seas through coal swamps to arid deserts, and more recently, cold glacial climates. Of the many different kinds of rock which make up the Mendips, the most important and useful is carboniferous limestone, a hard rock formed from calcium carbonate, full of the fossilised shells and skeletons of ancient sea life.

Carboniferous limestone shows an abundance of crinoid (sea lily) remains, corals (such as rugose) and brachiopods, ancient algae and stromatolites. Rock unconformities give the Mendip area pride of place in geological history. Several excellent hugely contorted fold structures can be seen in Asham Wood Quarry. Volcanic rocks are rare in the Silurian period, and the Mendips are one of the few places in UK where they can be observed.

Large scale quarrying started with the industrial revolution, though the oldest excavations in the Mendips date back to Roman times when the area was an important source of lead and silver. The rate of extraction has accelerated significantly since the 1930’s as the demand for roadstone in particular has increased, for which most limestone quarried locally (about 90%) is now used. All this history is insignificant though, in comparison to the millions of years of geological history exposed in a single quarry face and the 400 million years over which the Mendips have evolved.

The pros and cons of quarrying are ambiguous and controversial, fodder for comment and enquiry. With limestone being used at the rate of 5 tons, (approximately the weight of 1 fully grown elephant), per person per year there is no denying the demand for this material. Things made with limestone are all around us in the modern world. Limestone concrete is one of the most widely used construction materials, it is used in smelting of iron ore, in asphalt, the manufacture of plastic, in make-up and even in our cereal! Today the environmental impacts of quarrying are carefully managed. Plans are made and funds set aside for reclamation or beneficial use of currently active quarries for when they are eventually worked out, but how do such carefully managed schemes compare with the beauty and fascination of recolonisation by wild nature?

Despite this wonderful heritage, the Mendips are rurally isolated with limited engagement with the arts. The step in stone event offered opportunities for all to access the countryside while benefiting from arts/science engagement. The project also connected with 2015’s environmental milestone of sustainable development goals (SDGs) – see http://www.sustainabledevelopment2015.org.

step in stone was installed in stages from July-October ’15:

This film documenting the event was shown at the finale and gives legacy to the project.